Algae is known for its toughness and able to handle extreme weather on earth.  The toughest of all algae or from the areas of the Arctic were the weather is unfulfilling.  It is known as a photosynthesis type organism and produces over 70% to 90% of the world’s oxygen.  Another interesting fact is that there are over 20,000 different types of algae.

Recently, scientists took two hardy species of Arctic  algae and brought it on board the International Station in space.  The algae spent 16 months not from the inside of the space station, but out side the space station.  It was basically literally in space.  After over 500 days, the algae returned back to earth and was further study by scientist. 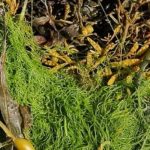 algae example – Not ones sent to space

Some of the interesting facts was that it was able to withstand the intense energy from space radiation and on top of a that handled temperatures that fluctuated from minus 20°C and upwards to 47°C.  Also take into account it was in the space vacuum as some would call it.  The algae was able to two continue its growth and behaved like normal algae when it was back on earth.  The next step is for scientists to further see if there is any damages done to their DNA of both specimen.  From further reading, it seems that the algae was first dehydrated and then was launched onto the station.

Overall the algae was kept at a low metabolic state and basically didn’t grow.  In other words it was in a dormant state capable of surviving in space.  The purpose of the study was to demonstrate that organisms from Earth could withstand space by just being bare.  It also provides the case of meteorites are the spawn of creation.